We the Kings is an American pop / rock band from Bradenton, Florida, currently signed to record label S-Curve Records. They released a self-titled full-length album in 2007, which peaked at #151 on the Billboard 200. Their second full-length album, Smile Kid, was released in December 2009 and have since completed a variety of tours. We the Kings also sports their own miniature series of webisodes, called The King's Carriage, detailing life on their tour bus. Their frontman Travis Clark has speculated on his blog that their next album could be an acoustic album.

Terrible Things is an alternative rock band (2010) featuring Fred Mascherino aka The Color Fred (Ex-Taking Back Sunday/Breaking Pangaea), Andy Jackson of Death in the Park (Ex-Hot Rod Circuit), and Josh Eppard aka Weerd Science (Ex- Coheed and Cambria/3). The band is signed to Universal-Motown records and released their debut album on August 31st, 2010.

There have been at least four bands called The Butterfly Effect: 1) Australian hard rock band
2) Swedish 90's electronic band
3) Thai Rock/indie band
4) Canadian alternative rock band (1999-2004)
(1) The Butterfly Effect is a hard rock band from Brisbane, Australia, formed in 1999. They have built a reputation for being one of the most exciting and hard working live acts in Australia. Since February 2002 the band has toured Australia and Europe extensively knocking up over 800 national and international performances as a headlining act.

Cross a librarian with a rock star and what do you get? Black Cab.
Black Cab comprises of singer and producer Andrew Coates and guitarist James Lee (both based in Melbourne, Australia). The band has worked with Alex Jarvis (Automatic), Ashley Naylor (Even), Anthony Paine (High Pass Filter), Richard Andrew (Registered Nurse, Underground Lovers), and Steve Law (Zen Paradox). Black Cab's released their debut album, "Altamont Diary" in 2004.

Tegan Quin and Sara Quin (born in Calgary, Alberta, Canada on September 19, 1980) are identical twins and Canadian singer-songwriters, performing as Tegan and Sara. They initially played as Plunk in 1995, and lacked a drummer and bass player. In 1997, they used their school’s recording studio to record two demo albums: "Who's in Your Band?" and "Play Day". In 1998, they made an early breakthrough by winning Garage Warz Battle of the Bands, a local music competition in Calgary.

The Brisbane-born Shane Nicholson is an accomplished singer-songwriter with two critically acclaimed, yet commercially unsuccesful albums under his name - 'It's A Movie' and 'Faith & Science' - and a best-selling duet album with wife Kasey Chambers under the name Kasey Chambers & Shane Nicholson 'Rattlin Bones'. He also released 2 EPs and an album with his band Pretty Violet Stain, who broke up in 2001. 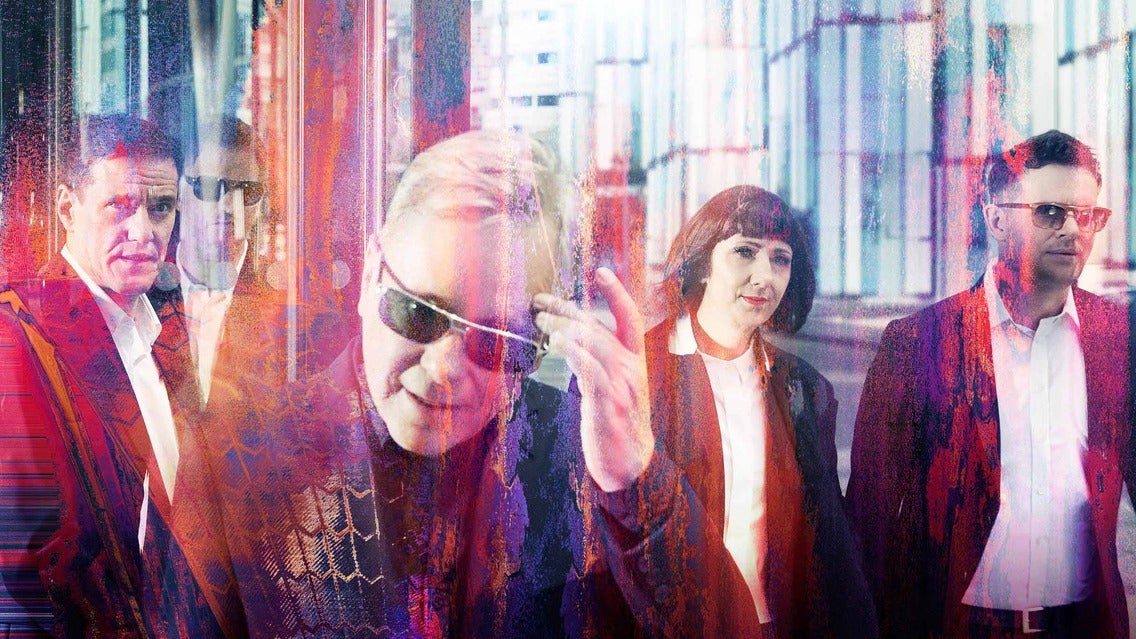 New Order are an new wave/synthpop band which formed in 1980 in Salford, England, United Kingdom by the three remaining members of Joy Division. The band's classic lineup consists of Bernard Sumner (vocals, guitar, keyboards), Peter Hook (bass, electronic percussion), Gillian Gilbert (keyboards, guitar) and Stephen Morris (drums, keyboards). The group effectively disbanded in 1993 but reformed in 1998. Gilbert left in 2001 to look after her and Morris' children and was replaced by guitarist/keyboardist Phil Cunningham. Hook left acrimoniously in 2007 and declared the band to be defunct. Initially, Sumner, Cunningham and Morris denied the band had split up, but in 2009, following the release of the trio's Bad Lieutenant album, they admitted that that they could not continue on without Hook and officially disbanded. However, the band reformed in 2011 for a pair of charity dates without Hook, with Gilbert returning to the fold and Tom Chapman replacing Hook on bass.

Pioneers of dance music in the 1980s and one of the first bands to effectively and popularly synthesize keyboard- and guitar-based music, New Order's members hailed from Salford and Macclesfield, England out of the ashes of Joy Division, are noted as being one of the first bands to bridge the gap between Post-Punk and Dancefloor. They were Factory Records' highest selling artist. They also funded Factory's famous Manchester club, The HaÃ§ienda. The band partnered with Quincy Jones's American label Qwest, recorded with legendary hip-hop producer Arthur Baker (on 1983's single "Confusion" and 1984's "Thieves Like Us"), and they embraced Ibizan club culture on the album, Technique.

The band was formed in 1980 by the three surviving members, Bernard Sumner, Peter Hook and Stephen Morris of Joy Division after the lead singer Ian Curtis committed suicide. Morris' girlfriend (and later wife) Gillian Gilbert joined in October 1980 on keyboards and occasional guitar shortly after contributing guitar to the second release of New Order's first single "Ceremony". Their early music followed in the same vein as Joy Division, most notably on debut album Movement. This is mostly seen now as a 'transitional' album where the new 4-piece band was trying to find a new identity.

They continued to develop their music and their identity with tracks such as "Procession" and "Temptation" until 1983 when, under the influence of early electro funk and Italo-Disco tracks (most notably Klein & MBO's Dirty Talk), they released "Blue Monday", arguably their most famous song and the biggest-selling 12" single of all time. This came in such a detailed Peter Saville-designed sleeve (replicating a floppy disc) that it is claimed by some that the band's record company, Factory, lost money on every copy sold.

The release of "Blue Monday" coincided with the album Power, Corruption & Lies which further developed their dance/rock crossover. Other albums followed in 1985 (Low-Life), 1986 (Brotherhood) and 1989 (Technique, influenced heavily by Ibiza's acid house scene). In 1990 the band scored their sole number 1 hit with a song written by Keith Allen and performed with the England football team, "World in Motion", the official England World Cup song. One more album, Republic followed in May 1993, which was released by London Records after the collapse of Factory in November 1992.

The band effectively split in 1993 to pursue solo projects, but returned with a triumphant gig at the Reading Festival in 1998. After the recording of 2001's Get Ready album Gillian Gilbert left the band amicably for family reasons - her and Stephen's daughter Grace had been diagnosed with Transverse myelitis and she came to the decision that it would be easier for the band to replace her than her husband. They have since gone on to produce one more album with the help of Phil Cunningham of Marion when they released their last album, Waiting For The Sirens' Call.

Hook left acrimoniously in 2007 and according to him, the band has effectively broken up. However, Sumner, Cunningham and Morris repeatedly denied that the band was over, and that if Hook no longer wanted to be in the band, that was his choice. Hook has since threatened to take legal action if they attempt to continue as New Order. In 2009, Sumner, Morris and Cunningham announced that they did not plan on continuing on as New Order without Hook. However, in September 2011 it was announced that they will reform as New Order for two concerts in October (Brussels and Paris), without Hook but with Gillian Gilbert. Hook's replacement is Tom Chapman, who is also in Bad Lieutenant with Sumner, Morris and Cunningham. The charity gigs in Brussels and Paris were very successful and New Order decided to go on tour in 2012. They played various concerts all over the world and also some big festivals in the summer.

Collaborations and other projects:
Shortly after the split, Sumner and Cunningham formed Bad Lieutenant. The band's debut album Never Cry Another Tear, released in 2009, features Morris on drums on several tracks, although he is not an official member of the band and has committed to continue musical projects with Gillian Gilbert. The band's various solo projects understandably seemed to contain elements of the New Order 'sound', and gave some clues as to each member's contribution to the band.

Bernard Sumner worked with Johnny Marr (formerly of The Smiths) and Neil Tennant (of The Pet Shop Boys) in the 'supergroup', Electronic. Peter Hook formed the bands Revenge and, later, Monaco. These projects gained some commercial success. Stephen Morris and Gillian Gilbert recorded two albums of songs as The Other Two, and also did scoring work for film and television.

Each of New Order's four original members have, at various times, acted as producers and/or guest musicians under the moniker of Be Music for a myriad of Factory labelmates and other artists, including: Section 25, A Certain Ratio, Happy Mondays, Paul Haig, The Stockholm Monsters, The Stone Roses, and Stanton Miranda. Read more on Last.fm. User-contributed text is available under the Creative Commons By-SA License; additional terms may apply.

4 handsome gents who came together in 2005. Drawing influence from pop throughout the ages, combined with a distinct DIY ethic. Recently releasing a 7' Single containing the song 'Mirror Ball' offers a taste of a soon to be released album.

Polly Jean Harvey, born October 9, 1969 in Yeovil, United Kingdom and raised in nearby Corscombe (Dorset), is an English singer-songwriter. She has recorded as a solo artist under the name PJ Harvey, but she began her career as part of a trio (with drummer Rob Ellis and bassist Steve Vaughan), also named PJ Harvey, in 1991 Early material released by the trio on Dry, 4 Track Demos and Rid Of Me was praised by critics for its raw lo-fi, many times acoustic guitar sound and melancholic, witty lyrics.

Wheatus is a rock band from Northport, New York formed by Brendan Brown (vocals, guitar) in 1998. After writing a few songs, Brown enlisted his brother Peter Brown (drums) and Rich Ligey (bass) to record a demo. In 1999 the band signed with Columbia Records and released their debut album, Wheatus, the following year. This album contained the band's first, and so far biggest, hit, Teenage Dirtbag (from the movie Loser).